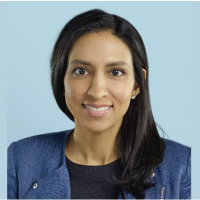 Amrita Ahuja started her career as an investment banking analyst and strategic planning analyst at Morgan Stanley and The Walt Disney Company, respectively. After working as a Director in Fox Network’s Business Development Group where she focused on the intersection of digital media and entertainment. Ahuja spent 8 years in interactive entertainment across four roles at Activision Blizzard, including the Chief Financial Officer (CFO) at Blizzard Entertainment. Ahuja transitioned over to Block, Inc. as the Chief Financial Officer (CFO) in January 2019. According to the Wall Street Journal, she became excited about (at the time) Square because of its impact on small-business owners like her parents, who had immigrated from India and owned a day-care center in a Cleveland suburb.​

Since Ahuja has been the CFO at Block, Inc., she has been working to expand Block Inc.’s narrative to support small and large businesses alike with not only payments, but also software and integrated solutions, hardware, and financial services, and consumers with Cash App. With Ahuja’s long-term vision, Block Inc. plans to make long-term investments in AI and cryptocurrency as she believes it will enable the Company to launch products in industries that were otherwise restricted because of a lack of technology or inadequate risk models. Ahuja has also led the initiative to commit $100 million of Block treasuries to social impact funds and $10 million through Block’s Bitcoin Clean Energy Investment Initiative to support a more sustainable bitcoin ecosystem. Lastly, Ahuja was at the helm of Block’s financial strategies during their acquisitions and ongoing integrations of both TIDAL and Afterpay in 2021 and 2022, respectively.