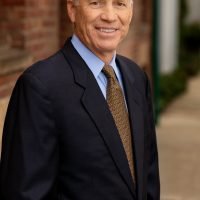 Clay Creasey grew up on a farm in the Napa Valley, after which he went to “The Farm” (aka Stanford) in Palo Alto where he earned a degree in statistics and an MBA (both with honors).

His first two jobs were as an actuary at Fireman’s Fund and a corporate banker at Crocker Bank. In 1982 Creasey joined Lucky Stores, a $9 billion nationwide retailer. During his eleven years there, the company experienced a leveraged recap and a takeover battle.  Along the way he gained his CPA certificate, and he finished as VP Controller of their $3 billion Northern California Division.

Creasey’s next stop was Mervyn’s (a Target subsidiary), where he was promoted to CFO in 2000. In 2005 Target sold Mervyn’s to private equity, prompting Creasey to move on.  Mervyn’s went bankrupt in 2008, giving rise to litigation against the private equity buyers. Years later Creasey’s testimony helped the creditors win a $166 million settlement – a decent day’s work for a CFO!

In 2006 Creasey was recruited by KKR to join Toys “R” Us as CFO, which had just been purchased by three private equity firms for $6 billion. Operating in 12 countries, Toys was grappling with shifting retail channels. After developing a turnaround plan which included new store formats and a significant Asia expansion, Creasey took Toys to the brink of an IPO in 2010. However, the Amazon choke-hold on bricks and mortar was inexorable. Creasey left the company in 2014 and joined Sun Bancorp as chair of their audit committee. Three years later Toys was in liquidation.

Creasey signed on with MWG in 2016 as CFO. Led by visionary CEO Tim Condon, since then MWG has: 1) made the largest acquisition in AAA history (AAA Smart Home), 2) acquired the largest autonomous vehicle test track facility in America (GoMentum), 3) established the country’s largest point-to-point car rental service (GIG), and 4) secured several patents for new product concepts, including technology for super-fast battery charging. While all this was happening, MWG more than doubled its shareholder equity (outpacing the S&P 500) and rose to the top quartile among its peer AAA companies in terms of Member growth and satisfaction.

Creasey’s take on innovation? It is all about courage, optimism, and perseverance.  And it pays.