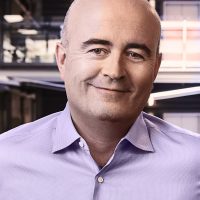 James Gerard “Ger” Griffin is Zynga’s Chief Financial Officer and brings over 30 years of global business experience and deep expertise in financial and operational management within the gaming, media and technology sectors.

Since joining Zynga in 2016, Ger has successfully led the company as well as a diverse and talented team of over 70 financial professionals through a profound transformation, driving a successful turnaround of the business and strong execution of an exciting multi-year growth strategy. Under his financial leadership, the company has dramatically scaled and seen significant improvements in financial performance and business fundamentals.

Throughout this period, Ger has meaningfully improved Zynga’s credibility, profile and relationship with analysts and the investor community. Active IR engagement and quality execution on its commitments significantly enhanced investor confidence in the potential of the company. Some highlights from the end of 2020 versus 2016 include:

Ger’s financial leadership in capital allocation and M&A has also been instrumental in further amplifying Zynga’s transformational growth to date.

During his tenure, Ger has executed a series of material capital allocation initiatives to unlock capital and fund Zynga’s growth momentum. In 2019, the company generated $581 million of net cash proceeds and a one-time gain of over $300 million from the sale of its San Francisco headquarters building. Ger also led two highly-successful convertible note offerings in 2019 and 2020 that raised approximately $1.4 billion in net cash as well as executing an expanded $425 million credit line facility.

In addition, during his time at Zynga the company has executed $226 million of share buybacks while also launching a $25 million fund to invest in and promote Diversity, Equity and Inclusion at Zynga and in the games industry.

Ger has also been instrumental in executing a series of highly accretive and growth-oriented acquisitions totaling over $3 billion in value. These acquisitions have significantly expanded Zynga’s global footprint, studio talent and game IP portfolio. Most recently, Zynga announced it has entered into an agreement to acquire Chartboost, a leading mobile advertising and monetization platform that will bring a new level of audience scale and competitive advantage to Zynga in the mobile ecosystem.

Ger and the team have maintained this positive momentum into 2021 delivering record Q1 results. They remain focused on execution against all aspects of Zynga’s growth strategy and aim to increase Zynga’s total addressable market while driving strong topline growth and margin expansion over the coming years.

Before joining Zynga, Ger spent more than 10 years at Electronic Arts, Inc. During his tenure at EA, Ger served as Senior Vice President of Finance where he was the finance leader for EA’s Studios and Publishing organizations. Prior to that, he spent six years in Geneva, Switzerland as Chief Financial Officer for EA’s International business and was a key member of the company’s leadership responsible for the development and expansion of EA’s games across all platforms including mobile, console and PC.

Prior to EA, Ger held a number of senior finance roles domestically and internationally at technology and media companies, including NBC and Primedia, as well as in public accounting with KPMG.

Ger is married to Paula and has two children and a beloved Yorkie.