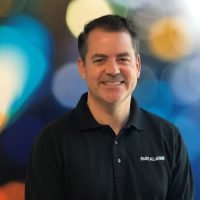 Jonathan Surridge is dedicated to driving performance and strategic decision making through the application of rigorous and creative analysis. With a career spanning over 25 years in investment banking and finance leadership, he has a proven track record of creating value via metrics driven planning, business combinations, and capital raising.

In November 2019, Surridge joined Bay Alarm as CFO, a family-owned company of over 1,000 employees, as it was nearing the 75th anniversary of its founding. He was eager to take on the challenge of adding value to an already high-performing, long-standing company. Surridge quickly established himself as a trusted advisor to the senior executive team and board of directors. In just over two years, he put in place new performance metrics, designed and launched a new commission structure optimizing for more profitable growth, and executed multiple M&A transactions.

Surridge would describe his leadership style as that of a player-coach, striving to build high functioning teams by developing the careers of everyone he works with. He seeks to promote from within, helps colleagues set and achieve professional development goals, and encourages them to pursue supplemental professional training. In addition, he has created a “Finance for Technicians” class, which he has presented in-person to over 100 non-financial professionals, in order to spread a deeper understanding of the financial metrics and drivers of Bay Alarm.

Before joining Bay Alarm, Surridge was CFO of three venture-backed fintech start-ups which he successfully led through phases of rapid growth and capital raising. Prior to his career in leading finance organizations, he advised public and private companies as an investment banker with such firms as Wells Fargo Securities and Bear Stearns on initial public offerings, bond issuances, and M&A for technology companies. He earned his B.A. from Yale University and his M.B.A. from the Haas School of Business at the University of California at Berkeley. Surridge is married to Margaret Surridge, and together they have four children, Caroline (18), Colin (16), Evan (14), and Elizabeth (soon to be 12).