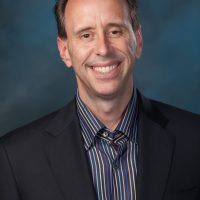 In his role as Chief Financial Officer, McGee oversees all aspects of accounting, financial planning, IT, and legal for the Academy, ensuring that the institution’s resources are managed wisely in alignment with its strategic plan.

Before joining the Academy in 2016, McGee served as CFO at Discovery Science Center, a nonprofit science museum in Southern California. There, he led the organization through the construction and opening of its second location in Los Angeles.

In 2015, he was named “CFO of the Year” in the Not-for-Profit category by the Orange County Business Journal.

Prior to Discovery Science Center, McGee served as CFO for Palace Entertainment, the largest operator of water parks and family entertainment centers in the country.

He was also an executive with the Walt Disney Company for 11 years,   holding key leadership roles in the Theme Parks and Resorts segment.

McGee holds a bachelor’s degree in accounting theory and practice from Cal State Northridge and is a CPA.