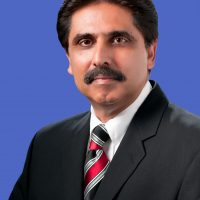 Mr. Nayyar is also lead director and chairman of the audit committee at Smart Global Holdings, a $1.1 billion specialty memory company. Prior to joining Power Integrations, Mr. Nayyar was a senior finance executive at Applied Biosytems, a $2.3 billion life-sciences tools and consumables company, and at Quantum Corporation, a $4 billion developer and manufacturer of high-performance storage devices.

Mr. Nayyar is a results-driven leader who has consistently improved profitability and cash flows through revenue-growth strategies, cost-reduction initiatives and tax planning. Since he joined Power Integrations, the company’s market value has increased roughly four-fold, and its operating cash flows have more than doubled, enabling the company to maintain a steadily growing dividend and execute several highly accretive share-repurchase programs. Mr. Nayyar has also overseen five M&A transactions at Power Integrations including the $116M acquisition of Switzerland-based CT-Concept as well as UK-based Cambridge Semiconductor. Previously, he was instrumental in the multi-billion-dollar sales of Applied Biosystems and Quantum.

Through his oversight of Power Integrations’ human resources function, he has presided over a 75% increase in the company’s headcount, helped sustain a below-average rate of employee turnover and championed the company’s above-market benefits program including the initiation of a 401k matching program.

Mr. Nayyar’s prior experience includes public accounting at Ernst and Young (where he served clients in the technology, software and life sciences sectors) and international accounting work in Asia . Mr. Nayyar has a Bachelors of Commerce from the University of Delhi, India. He is a Certified Public Accountant from California and a Chartered Accountant from India. Mr. Nayyar has attended the Directors College at Stanford University and is a member of Financial Executives International which in 2017 awarded him its CFO of the Year Award for small public companies. Mr. Nayyar and his family are long-time supporters of the Delhi-based Amar Jyoti Charitable Foundation, which provides rehabilitative services to persons with disabilities through education, medical care, vocational training, child guidance and self-employment.